The late 1990s to early 2000s telecom revolution prompted laser manufacturers to innovate and design more varieties of lasers to meet the growing demand in telecom applications. One of the best ways to meet the needs of low signal lasers is to use distributed feedback lasers (DFB lasers).

These lasers have not only contributed to addressing the needs of the telecommunications industry but have also caused the disappearance of DBR lasers (Distributed Bragg Reflectors) from the market.

In this post, we’ll look at the differences between DFB lasers and DBR lasers. But before that, we will take a quick look at what DFB laser is and what DBR laser is. 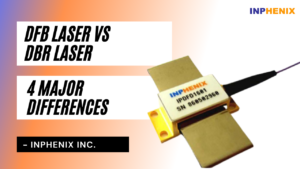 What Is DFB Laser?

A DFB laser is a type of diode laser that generates resonance and oscillation in the cavity using diffraction gratings rather than mirrors. A distributed feedback (DFB) laser’s purpose is to sharpen the output of conventional Fabry-Perot lasers.

Let’s take a closer look at what a DBR laser is.

What Is DBR Laser?

DBR lasers are among the earliest, if not the first, single-frequency lasers ever built. These are tunable single mode diode lasers with a resonator made of a short piece of active fiber sandwiched between two Fiber Bragg Gratings.

In comparison to the DFB laser, the DBR laser generates a single frequency, phase coherent photons at a specific wavelength. Therefore, the gratings in DBR lasers act as mirrors with variable reflectivity at different wavelengths.

We will now look at the significant differences between DFB laser and DBR laser in the following section.

Some of the key differences between the Distributed Feedback Laser and the Distributed Bragg Reflector are listed below. Let’s take a glance at each one to get a better understanding of them.

A. DFB Laser vs. DBR Laser– The Architecture

In the case of a DFB laser, the EPI surface is subjected to air oxidation, and contamination occurs during ridge and grating processing, resulting in more unsatisfactory performance. In contrast, DBR lasers have lower defect levels than distributed feedback lasers, resulting in higher powers and improved stability.

The third significant distinction between the DBR laser and the DBR laser is that the DBR laser only works at a single longitudinal mode with the highest gain and gain bandwidth of the EPI. In comparison to DFB lasers, DBR lasers operate in many lasing modes that vary monotonically as the epi gain curve moves.

The DFB laser has two modes that are evenly separated from the grating’s Bragg wavelength. In contrast, the DBR laser operates in a single mode with no symmetry, allowing it to function in a single mode.

So those are the four primary distinctions between DFB laser and DBR laser. As we have seen, both of these lasers have many variations as well as similarities, which cause the two architectures to exhibit various behaviors that influence how they will function in specific applications.

Inphenix is a US-based laser diode and light source manufacturer specializing in manufacturing photonics devices such as Semiconductor Optical Amplifiers (SOA), Superluminescent Diodes (SLDs), Gain Chip, Lidar Lasers, and many others. The firm also builds customized laser devices based on the clients’ needs.