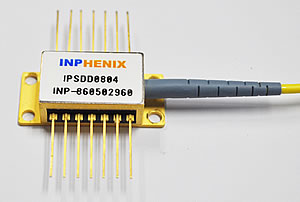 VCSELs have progressed from laboratory devices to industrial mass-production devices in the last few years. A vertical-cavity surface-emitting laser diode (VCSEL) is a semiconductor-based laser diode that emits light or an optical beam vertically from its top surface. The remarkable qualities and properties of this laser type have eventually outperformed Edge Emitting Lasers, which emit light from the side, and Light Emitting Diodes, which emit light from the sides and top.

A vertical cavity surface emitting laser (VCSEL) is a surface-emitting semiconductor light source that emits laser beams in a direction perpendicular to its top surface. Individual VCSEL emitters (or “apertures”) are very small, typically around 10 microns in diameter, but most often they are grouped into 2D arrays which collectively generate a much higher output power level.

There are 10 key parameters used to characterize VCSEL :

Vertical cavity surface emitting lasers (VCSELs) have been used for many different applications.

These characteristics of VCSEL make them an ideal component or technology for a wide range of applications. Some of the most frequent uses of VCSEL include gas sensing, biological sensing, computing, smart vehicles, smartphones, and optical communication.

A typical Vertical-Cavity Surface-Emitting Laser is composed of multiple layers. The top layer is a p-contact layer. The succeeding layer, i.e. the second layer, is a high-reflectivity mirror with a reflectivity of 99 per cent. The third layer is an active region that turns the light beam into a circular beam.

The laser cavity is located in the VCSEL’s fourth layer, which is the center layer. The active gain zone is where lasing occurs. Again, an oxide layer is present beneath the center layer to limit the light. The exterior layer is a distributed Bragg reflector (n-doped), while the bottom layer is a reflecting mirror having high reflectivity.

In a VCSEL, the active layer is sandwiched between two highly reflective mirrors composed of numerous quarter-wavelength thick layers of alternating high and low refractive index semiconductors. The reflectance of these mirrors is usually between 99.4 and 99.9 per cent. For this reason, the light oscillates perpendicular to the layers and exits through the top.

There are three primary types of VCSEL based on the structure:

1. A top-emitting structure with proton implantation to confine the current,

2. A selectively-oxidized top-emitting structure to confine the optical modes and the current, and