As the world becomes more technologically evolved, more and more devices are invented on a daily basis to make human life more comfortable and easy. One such significant advancement we saw was in the light and laser industry. There are many different types of lasers available to fulfill the varying demands of various sectors.

This blog will provide an overview of one such laser, known as the FP Laser. In brief, we’ll learn what it is, how it works, and what applications it has. Let’s get started. 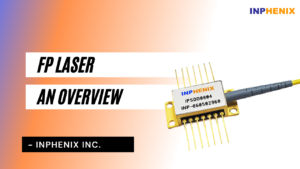 What Is FP Laser?

The FP laser, also known as the Fabry-Perot interferometer, makes use of the multiple beam interference phenomena, which occurs when light passes through a cavity enclosed by two reflective parallel surfaces.

When light strikes one of the surfaces, a portion of it is transmitted out, and the remainder is reflected back. The net result is that a single beam is split into numerous beams that interfere with each other.

Multiple reflections between two closely spaced partially silvered surfaces are used in the FP laser. Each time the light reaches the second surface, a portion of it is transmitted, resulting in several offset beams that might interfere with one another.

The enormous number of conflicting rays results in an exceptionally high-resolution interferometer, similar to how several slits in a diffraction grating increase its resolution.

In FP laser, two partial mirrors G1 and G2, are aligned parallel to one another at a distance d, forming a reflective cavity. When irradiated by a monochromatic light of wavelength λ at an angle of incidence θ, multiple reflections take place inside the cavity.

Part of the light is transmitted each time the light reaches the second reflecting surface. All such transmitted light rays interfere with each other to give rise to maxima or minima depending on the path difference between them.

Because of the remarkable features of the Fabry Perot laser, it has been widely used in a variety of industries for a variety of reasons. The following are some of the known applications of FP lasers:

In addition to these primary uses, FP lasers are used in telecommunication and medical fields to improve imaging precision and speed. Aside from being one of the most prevalent forms of laser diode, there are other types of FP lasers on the market. This ensures that all of the various needs of industries or individuals are perfectly satisfied.

So that’s all there is to it when it comes to the fundamentals of FP lasers. We learned about the FP laser, its principles, and its uses. In the following blog, we will go over all of these topics in-depth in order to learn them better.

Inphenix is a well-known laser and light source manufacturer based in the United States that produces a wide range of laser products such as swept-source lasers, distributed feedback lasers, gain chips, Fabry Perot lasers, and VCSELs. To learn more about their products, services, and expertise, contact us.