Swept Source OCT – Everything You Need To Know About

The 21st century is an era of technological revolution. We have witnessed a major technological paradigm shift in almost every sector, including manufacturing, customer service, education, and so on. During this time, we were introduced to cutting-edge technologies in the medical field as well.

In this blog, we will discuss the Swept Source OCT, its principles, and its applications, among other things. Let’s start with what swept source-OCT is in a nutshell.

What is a Swept Source OCT?

Swept source OCT, also known as SS-OCT, is an ophthalmic imaging technology used to diagnose and treat various eye diseases. It is a non-invasive method for cross-sectional imaging of internal retinal structures that employ low coherence interferometry to detect optical reflections and light echo time delays and, as a result, produces in vivo two-dimensional images of the internal tissue microstructure.

Undoubtedly, swept source OCT has positively impacted and contributed significantly to the study of vitreous humour, also known as vitreous.

In the year 2012, swept source OCT became available for the first time. However, it quickly became a popular and widely accepted retinal and choroidal imaging technology in ophthalmology and other clinical fields due to its remarkable benefits and usability over other imaging technologies such as Spectral-Domain Optical Coherence Tomography and Time Domain Optical Coherence Tomography.

For more info about Swept Source Laser and its principle read below. 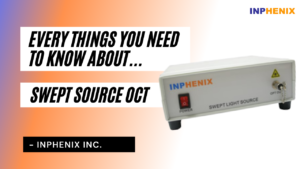 Furthermore, a narrowband light source with a central wavelength of around 1000 nm is used in swept source OCT. A short cavity swept laser can emit multiple light frequencies, which can then be rapidly tuned over a wide bandwidth.

Prior to the introduction of OCT, other imaging methods such as ultrasound waves and MRI were used for imaging. On the other hand, swept source OCT uses a slightly different mechanism to perform the same operation. Unlike sound waves or MRI techniques, OCT uses light waves to produce images.

Because of the shorter wavelength of light, this technology can produce high-resolution, zero-delay cross-sectional images. Let us now take a quick look at some of the significant advantages of swept source OCT.

Swept source laser imaging has numerous advantages over other imaging technologies. Because of its low coherence and zero delay time, it can produce high resolution, single focus, and 3D images in a very short period of time. Some of the benefits of swept source OCT is listed below:

2. The gentle light source of the swept source laser is another significant advantage of this technology. It allows the patient to sit still during the imaging.

4. The short wavelength of light aids in the generation of higher-resolution images.

5. Because SS-OCT does not have sensitivity roll-off, we can simultaneously produce images of the vitreous and choroid.