What Is Lidar Laser and How Is It Different From Radar Laser?

Lidar laser applications have grown dramatically in the past few years. Despite being invented in 1960, its acceptability and applications began to grow after 1990. As a result, this technology is now used in almost every industry, including agriculture, forestry, military, mining, transportation, etc.

In this blog, we will learn about LiDAR laser and how it differs from the more well-known RADAR technology. 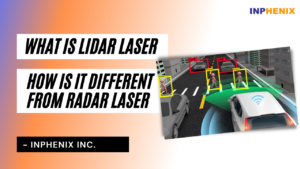 What Is Lidar Laser?

LiDAR is an abbreviation for Light Detection And Ranging. As the name implies, this technique measures the distance between objects by using light waves or a light source. To put it another way, it is used in range-finding applications.

The LiDAR lasers were first used to calculate the distance between the Earth and the Moon in 1960. However, over the last five decades, the uses of Lidar lasers have grown substantially.

Moreover, the functioning of LiDAR technology is very similar to that of RADAR technology. However, there are numerous distinctions between them. But, before we get into the differences, let’s have a look at how the LiDAR laser works.

How Does LiDAR Work?

The laser and the detector are the two basic components of any LiDAR laser system. Aside from that, the majority of LiDAR works on the Time of Flight principle. According to this principle, the laser in the form of a pulse is directed at the object, and the reflection or scattering from the object is measured by a detector built into the system.

The detector determines the difference between the transmitted and received pulses. So this is the fundamental idea underlying all LiDAR systems. Let’s take a closer look at how the Lidar laser differs from the RADAR laser.

First and foremost, let us learn what RADAR stands for. RADAR is an abbreviation for Radio Detection and Ranging. In the case of RADAR, radio waves are used to measure distance rather than light sources.

These radio waves can detect objects of incredibly small sizes. In contrast, light waves can detect even the smallest objects. In a nutshell, we can get considerably more precision by using LiDAR technology. LiDAR systems are used for 3D mapping or surface scanning of objects due to their great precision.

While RADAR systems are used in applications where the actual size and shape of the object are irrelevant, the detection distance is. As a result, they are usually used in military applications, or air traffic control systems where detecting the object is more critical than its shape or size.

However, unlike LiDAR lasers, RADAR lasers can operate in adverse conditions such as rain or fog. The LiDAR system, on the other hand, cannot function in such a harsh atmosphere. Now, let’s take a quick look at the principal differences between LiDAR laser and RADAR laser.

So these are some of the fundamental distinctions between the LiDAR laser and the RADAR laser. In the following article on LiDAR, we will look at its properties and applications.

Inphenix is a leading light source manufacturer based in the United States. The company has extensive experience and expertise in making a wide range of optical sources such as swept sources, DFB lasers, Fabry Perot lasers, Superluminescent diodes, etc. For inquiries, call us or mail us.