VCSELs (Vertical-Cavity Surface-Emitting Lasers) were invented in the mid-1980s. However, in a relatively short period of time, VCSELs established a reputation as a superior technology for short-distance applications such as fiber channel, Ethernet, and intra-systems communications.

Over the next few years, VCSELs displaced edge-emitter lasers as the technology of choice for short-range datacom and local area networks. VESSEL’s success can be primarily due to its lower manufacturing costs and improved dependability compared to edge emitters. 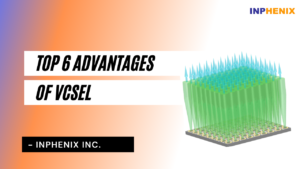 In this article, we will look at the benefits of VCSELs in order to understand why they are regarded as one of the most effective lasers and why they are used in a variety of industries.

Moreover, VCSELs are manufactured in multiple ways, the most common of which is to integrate them onto a wafer, where thousands of diodes can be integrated on the surface. Another option is to make them into arrays so that the output power can be increased.

When it comes to the VCSEL structure, it is made up of layers of semiconductor material grown on top of one another on a substrate. This is commonly done in a molecular beam epitaxy (MBE) or metalorganic-chemical-vapor-deposition (MOCVD) growing reactor for VCSELs and edge emitters. For more information regarding VCSEL and Characteristics visit here…

The formed wafer is further processed to create individual devices. Now, in the following section, we’ll look at the benefits of the VCSEL laser.

The numerous benefits provided by VCSEL technology can be summarised as follows:

So that’s a fundamental understanding of VCSELs and their benefits. In the following blogs, we will discuss VCSEL applications.

Inphenix, based in the United States, is a prominent manufacturer of light sources and lasers. The company produces high-quality and reasonably priced light sources such as FP lasers, DFB lasers, swept-source lasers, gain chips, and many others. To learn more, contact us.